As the house lights dim in The London College of Music‘s ‘Lawrence Hall’, two brass bands replicated some of the performance tensions associated with brass band contesting. On Monday 06th March, both Regent Brass and Regent Community Brass combined to ‘run out’ their respective ‘test pieces’ for the impending Regional Contest. Graciously hosted by the University of West London’s London College of Music and including mock adjudication, the performances were aimed to help prepare the bands for contest conditions. 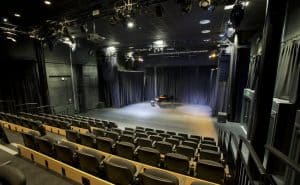 Lawrence Hall at The University of West London

But why? What’s the point of a pre-contest concert? There are a few key reasons for doing such a thing:

So, how did the evening go for the Regent Brass Bands?

Regent Community Brass, directed by MD Chris Bearman, kicked-off proceedings with the 4th section test piece ‘St Andrew’s Variations’ by Alan Fernie. Not without its rhythmic and dynamic challenges, the band gave a performance full of energy and charm with a clear direction from Chris at the front. Next up was a little light relief after the sustained concentration required by any major work – a delightful rendition of ‘Shepherd’s Song’ (arranged by Goff Richards), featuring Principal Cornet, Catherine French. This was light, delicate and well-shaped, giving the audience some time for reflection and to enjoy the warm sound of the band. To end their set, the Regent Community Brass performed another large work for brass bands, Jacob de Haan’s ‘Oregon’. Showing a real drive and painting pictures of the ‘wild west’ with trombones for train horns and galloping snare drums, ‘Oregon’ provided a high-impact conclusion to the performance. 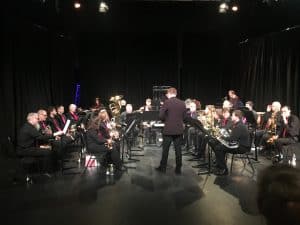 Time for a switch around as Regent Brass gathered on stage and settled for their performance. Paul Archibald announced the first piece, not their test but an extra treat for the audience, as the band fanfares into Malcolm Arnold’s ‘Fantasy for Brass Band’. There was certainly some adjustment to the acoustic between the Preston Road home ground and Lawrence Hall but overall the band approached the piece with energy and a full sound. The contrasting moods in the piece shaped a musical picture that resulted in healthy applause following the vigorous accelerando at the conclusion of the piece.

As the members of Regent Brass dabbed their foreheads (theatre lights will do that to you…), Paul handed the baton over to Nicholas Thompson, who is taking the band to contest due to Paul’s own performance commitments. Following the usual shifting in seats and moving of percussion silence descended in anticipation of Philip Sparke’s 1st section test piece, ‘Land of the Long White Cloud’. Particularly appropriate given the number of Kiwis in the band, the piece paints a moving picture of New Zealand and was originally commissioned for the New Zealand National Brass Band Championships of 1980 as the highlight of their centenary celebrations. As to be expected it is not the performance that the band will expect to deliver on contest day with several rehearsals still pending, but it moved from phrase-to-phrase, section-to-section and certainly delivered Sparke’s image of the faraway land. A few misfires (and the occasional fail-to-fire!) but the audience received the grand mosaic with warmth and appreciation following another prestissimo finale. 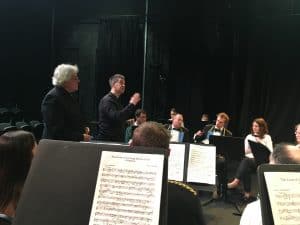 You would think at this point a pre-contest concert is over, right? Well… the bands thanked the enthusiastic audience, and of course the University of West London for hosting, and people started to file out of the hall. But, as is the nature of contesting, given that Regent Brass was all setup it was decided to stay on and rehearse for another hour! Contest prep does not wait for anyone and whilst both bands delivered fine performances that they will both hope to step-up from, it was a fine evening of music in a wonderful venue that the Regent Brass Bands will hope to be fortunate enough to play in again.

Keep up with our news and upcoming events by subscribing:

Regent Brass is a 28 piece brass band, based in Central London at the DLD College, Westminster. We are a band that 'dares to be different' and have appeared on Radio and Television. We are also London's most central Brass Band. We rehearse Thursdays from 1930 - come and see us!
FacebookTwitter
Keep up with our news and upcoming events by subscribing:
Latest tweets
Impossible to retrieve tweets. Try again later.
Categories
Amazon Affiliates