On 11th Feburary, the band travelled to Dover to participate in the inaugural DFDS Seaways Open Brass Band Contest. The original set-up for the contest involved each band having to perform a hymn tune, solo feature and an additional work to a panel of three esteemed judges who each are respected examiners for the Associated Board of the Royal School of Music – Graham Harvey, Kenneth Peers and John Harper.

Competing against a very strong line-up at the contest, the band upset the odds by coming second, four points behind the winners Brass Band Heist, with pre-contest favourites Redbridge Brass and Zone One Brass coming in joint third place.

There was even greater cause for celebration for the band’s Solo Trombone player, Tetsuro Okamura, who won the “Best Soloist” prize of £500 and a recording contract after a sparkling performance of ‘Bluebells of Scotland’ by Arthur Pryor.

After such a fantastic result, the band has recieved a huge boost of confidence ahead of the L&SC Area Championships in March, where we will perform Derek Bourgeois’ demanding work “The Devil and the Deep Blue Sea”.

The band also owes a great deal of thanks to Craig Beattie and Lisa Stonham for assisting us on the day. 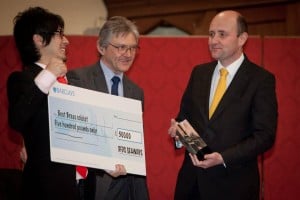